NOTE: This standard is used by Namecoin, but new merged mining data should likely propose a new BIP to supercede it with something based on p2pool's merged mining.

Auxiliary Proof-of-Work (POW)
a.k.a "AuxPOW". This is the way that merged mining can exist; it is the relationship between two blockchains for one to trust the other's work as their own and accept AuxPOW blocks.
Merged Mining
The act of using work done on one blockchain on more than one chain, using Auxiliary POW.

Auxiliary Blockchain
The altcoin that is accepting work done on alternate chains as valid on its own chain. Client applications have to be modified to accept Auxiliary POW.
Parent Blockchain
The blockchain where the actual mining work is taking place. This chain does not need to be aware of the Auxiliary POW logic, as AuxPOW blocks submitted to this chain are still valid blocks.

This is used to prove work on the auxiliary blockchain. In vinced's original implementation it's generated by calling the getworkaux RPC method on the parent blockchain client (bitcoind) and then the work is then submitted by passing it to the auxiliary chain client (namecoind) as the second parameter to getauxblock.

When receiving an Aux proof-of-work block in a "block" network message, the data received is similar to a standard block, but extra data is inserted between the nonce andtxn_count elements. In the below table, the shaded rows are the same as the standard block definition:

When only working on one auxiliary blockchain, the blockchain_branch link is not needed, and is nulled-out by being presented as 5 bytes of zeros (interpreted as a one-byte var_int indicating a branch_length of zero, and a 32-bit (4 byte) branch_side_mask of all zeroes).

Note that the block_hash element is not needed as you have the full parent_block header element and can calculate the hash from that. The current Namecoin client doesn't check this field for validity, and as such some AuxPOW blocks have it little-endian, and some have it big-endian.

Say Alice created a Merkle tree, and it's root element is publicly available. For example:

Now she wants to prove to Bob that a given hash (#10) was part of that tree, but Bob doesn't have the full tree (only the public root; hash #0). Alice can send Bob all the hashes she used to make the tree in the first place (hashes #7-#14, total of 7 extra hashes), so Bob can build the whole tree to verify the root is the same, but that's rather data-intensive. Instead, she could give Bob hashes #9, #3, and #2 (one from each level of the tree, working #10 back to the root). Without Bob knowing the structure of the tree, Alice also has to tell Bob what order to apply the hashes in (since hash(#9, #10) == #4, but hash(#10, #9) != #4). So Alice tells Bob "left, left, right" to indicate which operand #9, #3, and #2 are, respectively. That can be encoded as a bitmask and take up very little data to transmit. So, instead of transmitting 7 hashes to Bob, Alice transmits 3 hashes and a bitmask. The data savings get even more pronounced if the merkle tree gets even bigger.

That is the overall premise, and specifically for the AuxPOW protocol, it's been termed a "merkle branch" (since it's one pathway of a merkle tree), and is transmitted thus:

Insert exactly one of these headers into the scriptSig of the coinbase transaction in the parent block.

That string of 44 bytes being part of the coinbase script means that the miner constructed the AuxPOW Block before creating the coinbase.

If you're just mining a single auxiliary chain and using getauxblock, you don't have to worry about this - just set the merkle tree hash in the coinbase to the aux chain block's hash as given by getauxblock, the merkle size to 1, and the merkle nonce to 0. If you're mining more than one, this is a bit broken. It uses the following algorithm to convert the chain ID to a slot at the base of the merkle tree in which that chain's block hash must slot:

The idea is that you can increment merkle_nonce until the chains you're mining don't clash for the same slot. The trouble is that this doesn't work; because it just adds a number derived from the merkle_nonce to the chain_id, if two chains clash for one nonce they'll still clash for all possible nonces.[1] New implementers: please pick your chain_id so that not clashing with existing chains requires as small a value of merkle_size as possible, or use a better algorithm to calculate the slot id for your chain.

Once you know where in the merkle tree the different chains go, reverse the bytes of each chain's block hash as given you by getauxblock (so the byte at the start moves to the end, etc) and insert into the appropriate slot, filling the unused ones with arbitrary data. Now build up the merkle tree as usual by taking each pair of values in the initial row and double SHA-256 hashing them to give a new row of hashes, repeating this until you only have a single hash. This last hash is the merkle root. You need toreverse the bytes of this again before inserting it into the coinbase. If you're not using getauxblock to get the block hash, you can skip the first reversal but still need to reverse the final merkle root when adding it to the coinbase.

The aux proof-of-work also needs a merkle branch, which is built as follows: find the location of the block's hash in the merkle tree, and add the other value that you hashed it with in building the merkle tree. Now add the value you hashed that result with. Keep doing this until you reach the root. The merkle root itself is neverincluded in the merkle branch. If you just have a single aux chain, this can be left entirely empty. (It also appears you don't need to reverse these hashes.)

This is the AuxPOW block at height 19200 in the Namecoin chain (the first block that allowed AuxPOW authentication). It has a hash ofd8a7c3e01e1e95bcee015e6fcc7583a2ca60b79e5a3aa0a171eddd344ada903d, and only has one Namecoin transaction (coinbase sending 50 NMC to the miner's address). The parent block that was used as Proof of Work has a hash less than the difficulty target of Namecoin at the time, but not the Bitcoin target:

Hence, this AuxPOW block was valid in the Namecoin blockchain, but not in the Bitcoin blockchain (you will find no Bitcoin block with the hash starting 3d47277359fb969c. If it were, it would be right after 4a59b7deb5c4e01b, since that's the previous_block hash used) 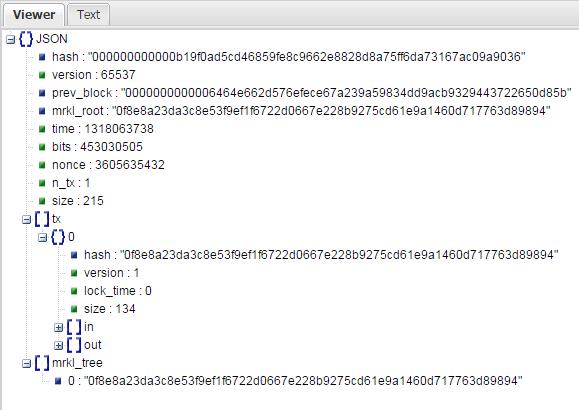